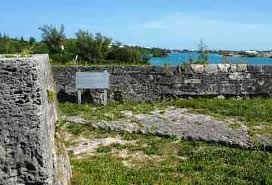 A ferry between Coney Island and Ferry Island was the only means of transport between St. George's and the mainland until 1871. During the the American Revolutionary War it was suggested if Bermuda was attacked the population of the maind island should retreat via the ferry to St. George's, where a stand would be made, so a bettery was built on Ferry Island to protect this imporatant area in the 1790's. In the 1870's Ferry Island Fort was rebuilt with emplacements for four large guns.

Ferry Reach Park is at the end of Ferry Road and the fort is at the western tip of the park.